Coco Praiano, Coco de Roda,  or Samba de Coco are Afro-Indigenous Brazilian rhythms from the North East of Brazil.  Like most Brazilian musical culture, the rhythms are also accompanied by dance, clapping, and songs specific to the culture of that region.  These songs are typically about fishing, the struggle of farming in an arid area, or various other subjects.

Coco Praiano or coco de roda is a style of coco from the costal region of Pernambuco state.  CSP's study is based out of Olinda, although a similar version exists in Recife, PE also. Our study was under Mestre Pacheco, who sadly passed away in 2021 from cancer, but our study continues un CM Pedro Campolina who received his title from M. Pacheco in 2018 and has studied under said master for over 10years.
​A tradition of fisherman and their communities CSP feels this style has a great connection with Baltimore, Maryland roots.  Many songs focus on fishing and waterman topics, and missing home on such travels.
Mestra Ana Lucia de Coco, Olinda, PE 2019 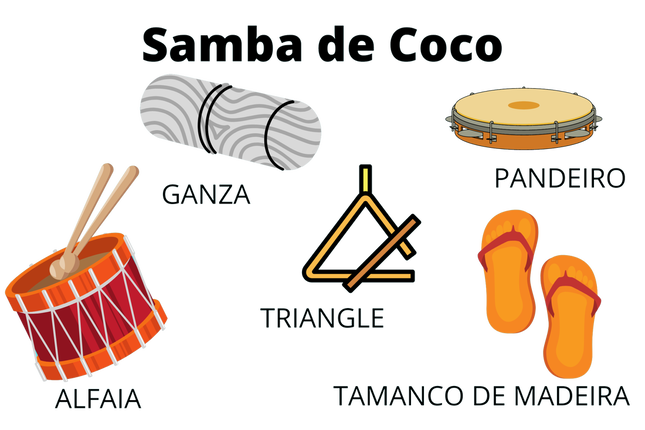 ​The instruments.
CSP was introduced to samba de coco through CM Pedro Campolina and his group and bloco Coco da Gente. While coco praiano has many of the same instruments and an associated dance, Samba de Coco actually incorporates footwork with wooden sandals called tamancos as an additional instrument.  Samba de Coco comes from Arcoverde which is a city in the countryside of Pernambuco.  As such, song topics focus on the struggles of living in an arid climate, moving to find habitable land, and the traditions of the generations that played coco before.

NOTE: We currently do not have any Samba de Coco classes, dance or instrumentation on our schedule. However, if you are interested in scheduling a workshop in either, feel free to use our scheduler below.
Schedule a Coco Workshop or Request more info
Capoeira Social Project (EIN: 26-2727728) is a registered tax-deductible non-profit organization under the IRS Section 501(c)(3) guidelines.  CSP offers programs throughout Maryland USA and in Belo Horizonte, MG Brazil.
Donate